Fruit As Self Defense 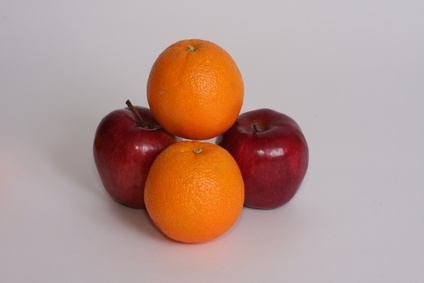 I read a Reurters article the other day about a gentleman in California who since the year 2000, purchased nine single family homes. All of them are now being foreclosed upon. The article blamed negative amortization loans for his demise. What the article doesn’t say is just exactly what this man’s investment strategy had been. Had he intended to simply ride the appreciation? Was he renting the homes out?

I’ve had my California real estate license. And I know, at least in the Los Angeles area, that investors use a little tool called the gross rent multiplier or GRM. In fact, it is so prevalent that it’s even calculated and displayed on the MLS.

What’s a GRM? Well, like its big sister the cap rate, it’s a way I use to quickly look at an investment property and decide whether or not it makes financial sense compared to the others on the market. Call it a quick and easy way of comparing apples and oranges.

A general rule of thumb is the lower the GRM, the greater the cash flow.

I’ve done too many of these to count. And after endless late nights doing entire spreadsheets on properties, I realized that in the Twin Cities market, anything that’s got a GRM higher than a 10 isn’t going to cash flow. There are exceptions, yes. But we’ll cover those some other time (hint: owner occupied & tax write offs).

If the property meets my criteria, I will stop and do an investment worksheet. I’ll consider all the costs involved in ownership, as well as the market’s current vacancy rate. If I see a negative cash flow, I don’t necessarily discard the property. I just know it’s probably overpriced, and deserves a lower offer.

In the boom years, I warned buyers they wouldn’t hear from me very often. Properties that paid their own way were few and far between. Most of my clients stayed on the sideline. None of those who bought, however, are in predicaments like the California gentleman. Why?

Nobody can predict how much appreciation any real estate market will experience in a coming year. Any agent who tells you otherwise is either the world’s best psychic (and should be sharing lottery numbers) or full of it.

At one point, the market in southern California was experiencing appreciation of as much as 20% a quarter. People bought simply on the hope the value would skyrocket. But they never stopped to do the math. The properties may well have had negative cash flows from the start, meaning the owner had to go into his own pocket to make up the difference. This guy may have been doomed from the moment he started.

Remember, when a property manages to pay for itself from the first day of ownership, it’s a great investment. Any amount it goes up in value is a bonus, not a guarantee.

Your Duplex’s Wiring May Keep You From Getting Insurance