Duplex Market Will Drive Ya Nuts 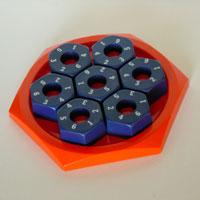 The Minneapolis duplex market reminds me of a puzzle my family had when I was growing up.

Called Drive Ya Nuts, it consisted of 7 nuts. The object of it was to line all of the numbers up on each nut so that they matched the numbers on the nuts next to them.

It wasn’t as easy as it sounds. And I vividly recall getting to the sixth or seventh nut, with all sides matching and me thinking I had it solved, only to discover I had it wrong.

That’s what the duplex market feels like today. I was sure there was a trend, with traditional sellers claiming more and more market share of new listings and pending sales, and average off-market prices going up. Then I looked at the numbers from the week ending July 23, 2011, and I wonder if I have it all wrong.

Pending sales were up 4 percent over the same week in 2010. I suppose that’s good news. However, the percentage of the duplex sellers who received offers and didn’t have to get a bank’s permission to sell was down 7.3 percent.

The average final list price duplexes left the market for the week at was $106,014. With properties selling for, on average, 92 percent of what they were originally listed for, this figure is likely to drop when these transactions close.

Last year, the average sold price for the duplexes that left the market during the week was $109,821.

The good news here is listings were up year over year. Now that sounds counter to the news over in the single family home market, where they’re hoping the amount of inventory on the market shrinks. In fact, they celebrated 13.2 percent fewer new listings than they did during the week in 2010.

However, duplex inventory has seemed scarce this year. So the sight of 41 new listings for the week, versus the 25 that came on during the week last year, was, for this Realtor with buyers looking, welcome news indeed.

Of these new opportunities in late July, 51.2 percent belonged to traditional sellers. This is a much stronger showing than the 20 percent market share they claimed last year.

In the single family home market, sales were up 54.3 percent over the same week in 2010. That would be staggering if not for the fact that many of last year’s buyer’s rushed to buy houses earlier in the year in order to meet the home buyer tax credit deadline.

I’m anxious to see what the rest of the year brings. If it’s anything like the puzzle, the answer will hinge on that one right piece.