Your Duplex’s Wiring May Keep You From Getting Insurance 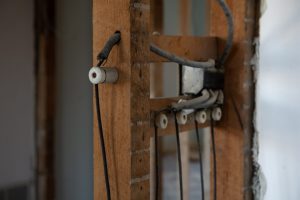 Yes, I know it’s not the most “electrifying” topic (pun intended), but it’s been coming up often when I’ve been showing property lately. Mainly, it’s been coming up in terms of problems or challenges a buyer may face in obtaining insurance on the duplex or house they’re buying.

Let’s start with Federal Pacific or Stab-lock electrical panels. I’ve been running into a lot of these lately, after not seeing them for quite some time. Federal Pacific made breaker panels under both their own name and the Stab-lock brand between the 1950’s and 1980’s. These panels are rightly considered a safety hazard as to this day the uey still cause 2800 fires a year in the United States. If you own a house or a duplex that has these, it is a matter you may want to address for the safety of both yourself and your tenants.

An image of the other common electrical issue I’ve seen in properties is knob and tube wiring. This is most commonly found in homes built in the 1940’s and before,  this form of carrying electrical current through your home.

You may not know what it looks like off the top of your head, but if I ask if you’ve ever seen white ceramic knobs in your attic or electrical wire covered with cloth, most will say yes.

Electricians will tell you this form of wiring is not inherently dangerous. However, it does have several challenges. First, and perhaps most important to modern living, it isn’t grounded. That means the home typically has two-pronged outlets, making it a bit more challenging to plug in modern appliances.

Knob and tube has been in a house a long time. As a result, it’s highly probably some modifications have been made along the way that may cause it to not be safe.

Finally, while some cities or counties may require it to be removed wherever visible, there isn’t a national code requiring it to be. However, nearly every insurance company I’ve spoken with who was made aware of its presence declined to cover the property. That will make any sale tough – especially one that’s financed.

Check your attic and check the cover of your breaker panel. If you see ceramic knobs, the words Federal Pacific or Stab-Lock, you may want to call an electrician.

The health and safety of your property, your family and your tenants may depend on it.