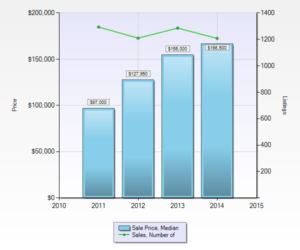 While I usually blog on Tuesdays about the most recent data we have on listings and sales in the Minneapolis and St Paul duplex market for the week that just finished, January is a great time to look back on the year before.

And when we look at 12 months of data, rather than a week or even a month, we can start to see trends.

However, when I say there’s very little on the market for duplex buyers to choose from, nothing underscores this more than looking at the Dollar Volume for Active Listings in December 2006, when it was $342,941,330; the last year considered part of the real estate peak.

Yes, many of those properties were over valued. However, that can’t explain everything. Closer examination of the numbers reveals in the month of December, 2014, there were just 468 active listings for duplex buyers to choose from; the lowest number of any month in more than a decade.

If you’re thinking of selling your duplex this year, things are looking up. Changes in FHA lending requirements (see my blog post later in the week) and pent-up demand are pointing toward a big 2015. Just remember, the spring duplex market always starts the week after the Super Bowl . This year, that’s Monday, February 2.

Of course, there might be a slight delay if we have -50 wind chills that week!